You are here: Home / News

Charley Burch, a lifelong Memphian, has been involved in civil service from an early age and has served as an appointed city government official in Memphis for 12 years. Charley served four and a half years as Secretary on the Memphis Alcohol Commission, and has served seven and a half years as Vice Chairman and Treasurer of the Memphis Music Commission.  Mr. Burch served a 2 year term on The Board of Governors for The National Academy of Recording Arts and Sciences and became a Grammy Member in 1996.

Charley is a Federal Transportation Security Officer for The Department of Homeland Security at The Memphis International Airport, and has been elected Vice Chairman of the DHS/TSA Employees Advisory Council. Charley is also a licensed Realtor with Keller Williams Realty. He has produced Memphis Music events and records for 30 years.  Charley is a member of Anshei Sphard Beth El Emeth Synagogue, and a Master Mason with Unity Lodge #95 (York Rite, Scottish Rite, Eastern Star and Shriner’s). Charley has a B.A. in History from Memphis State University.

Charley Burch is running for office because he is troubled that our city is becoming increasingly divided, both socially and politically. City Council Super District 9 Position 2 is a nonpartisan seat and it should be just that—nonpartisan. As a friend and member of unions and labor, when elected, Charley Burch will defend the rights and benefits of our Police, Firefighters and all Memphis City Employees. When elected, he will also focus on repairing our city’s infrastructure, including public roads and services. Mr. Burch is against higher property taxes. Charley will be a conduit for the voices of all his constituents and work with all members of Memphis City Council to establish and maintain a fair and balanced budget.

Vote for Charley Burch on August 2nd, 2018, and he will represent The Voice of The People and not private interests or agendas! It’s time to Rebuild Memphis for Memphians!

Burch continues to be the voice of his constituents and champion of their best interests and needs. He will convey their needs to City Council and guarantee that their voices are heard and satisfied.

When elected, Burch pledges that he will not vote to raise property taxes, will continue to fight to preserve the benefits of first responders and city employees, and will work with all members of City Council to arrives at a fair and balanced budget.

To learn more about Charley Burch and how you can support him and make Memphis better, please visit voteburch.com.

The Memphis City Council will choose one of seven candidates Tuesday to temporarily fill the council seat recently resigned by Philip Spinosa Jr.

The seven candidates to turn in 25 qualifying signatures were Charley Burch, a real estate agent and music veteran who ran as a Democrat in a 2016 House of Representatives race; J. Ford Canale, a funeral director and head golf coach at Christian Brothers High; Jimmy Lewis; Lisa Moore, president of Girls Inc. of Memphis; Kenneth Whalum Jr., pastor of New Olivet Baptist Church; Marvin White, a manager at FedEx Services; and Erika Sugarmon, a teacher at White Station High. Except for Burch, a resident of Cordova, the candidates all claimed East Memphis.

An eighth candidate, Tim Ware, a business consultant and the former executive director of the Achievement School District, applied but didn’t have enough valid signatures.

The council will make its interim appointment for the Super District 9, position 2, seat during its meeting Tuesday.

The majority of Memphians are Democrats and are not fairly represented by Memphis Government, especially in Super District 9. Memphis is a Blue island and we must keep it Blue being that one party and special interest groups have hijacked the rest of the state.

Democrat Percentage
63.350% – Percentage of the population registered as a Democrat

Republican Percentage
35.960% – Percentage of the population registered as a Republican

Tennessee is a decisively Red state with Governor Haslam being the wealthiest elected official in the entire United States of America. More people voted for Mitt Romney in Tennessee in the last Presidential election than Mississippi and Alabama combined.

Charley Burch is the ONLY Democrat in this race! Kemp Conrad is the former Chairman of The Shelby County Republican Party and Robin Spielberger is a Republican/Tea Party Member and activist.

The key to winning this race is getting out the Democratic vote! If Memphis Democrats go to the Polls and vote; we win hands down!

By electing Charley Burch to Super District 9 Position 1, he will be the 7th of 13 and help balance the Council against the needs of all Memphians. 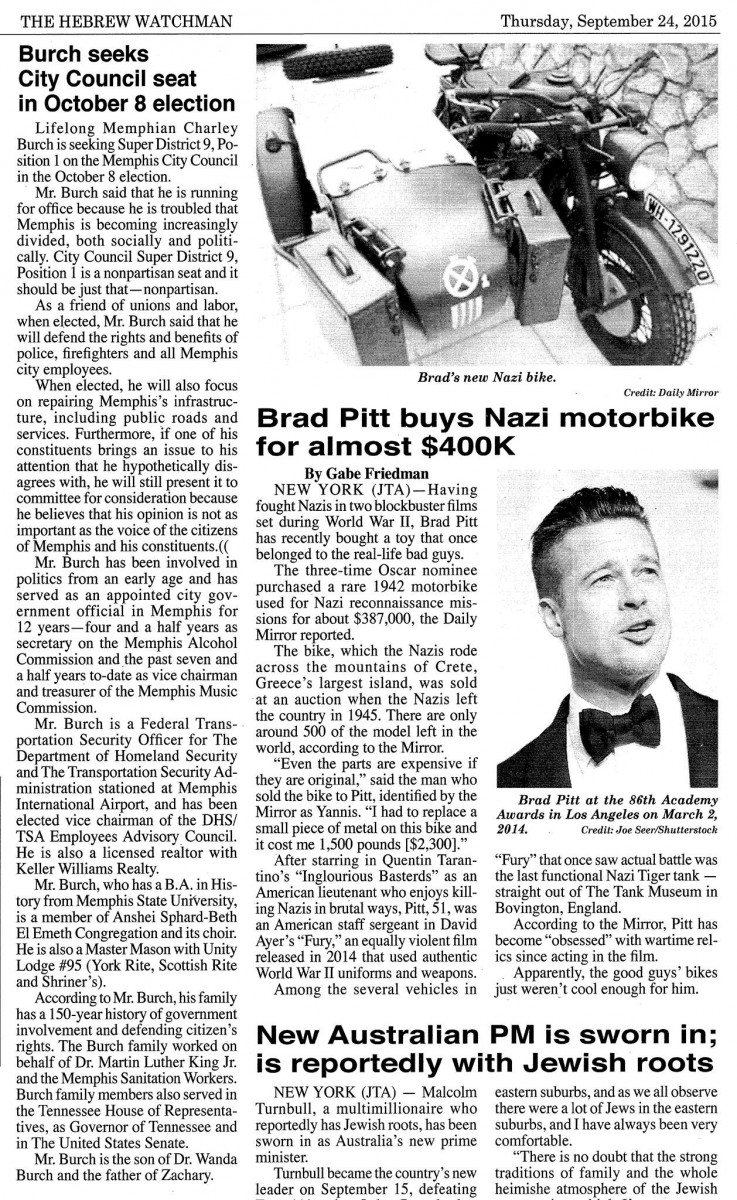 Change is in the air. That is a given. That’s the message of the slight but obvious up-tick in early voting statistics over the equivalent period four years ago. That is what the pollsters and pundits are telling us as they assess the chances of prevailing for this or that candidate for mayor in the 2015 Memphis city election, which is just two weeks away, on October 8th.

The Memphis Flyer posted the article, “And the “Winner” Is…Shelby County’s Democrats do a straw poll.”

Well, it’s a start. On the eve of early voting, which starts Friday and continues through Saturday, October 3t, the three gents pictured above have won one of the first actual votes of the 2015 election season — though it’s not (or not yet) the one they’re actually seeking.

Charley Burch provides introductory remarks for Bobby Rush, including remarks about Memphis music and his campaign, at the Heritage Festival on Saturday, September 5, 2015.